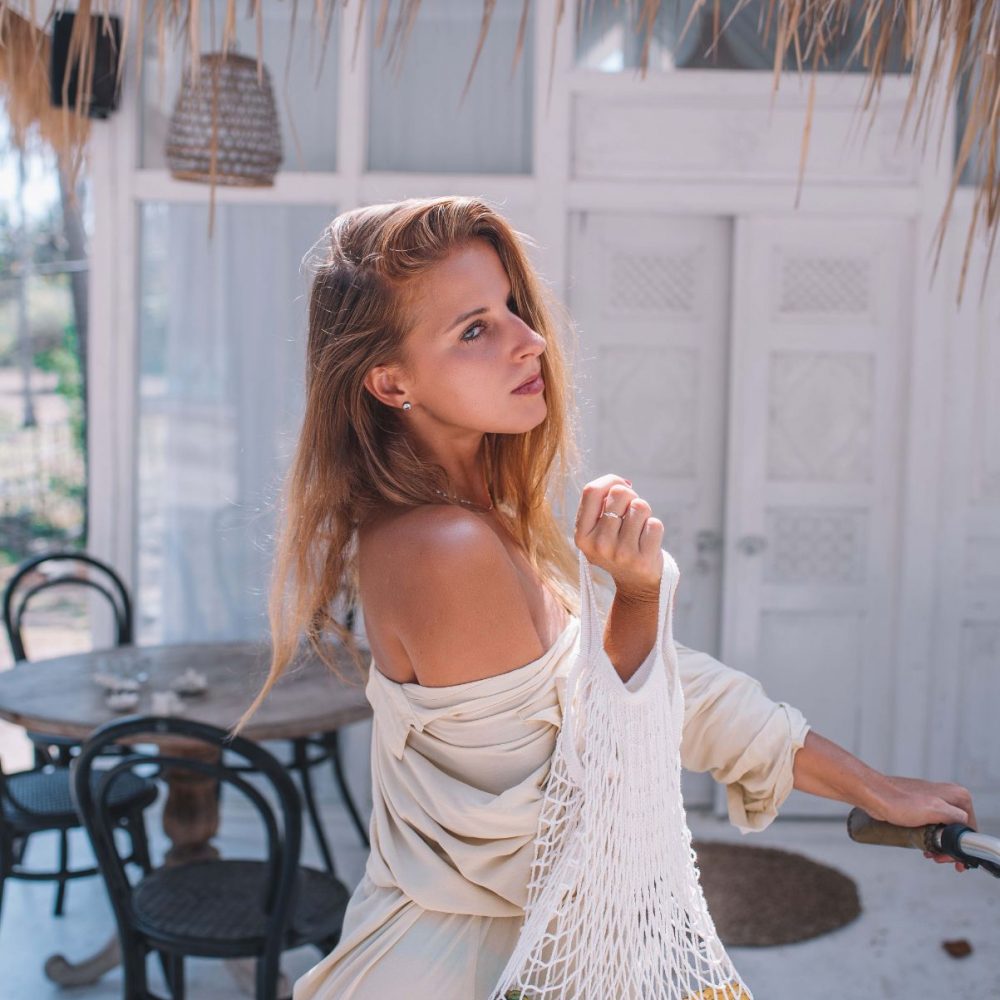 Travel, discover, open your mind, nothing in life is only black and white

Do not listen too much what other people say, because this is your life, your mind and your body. You are the only one who is responsible for how you feel in your life, so use this wisely!
Face your fears. Do it, because this is how you grow. Be around inspiring people and people from different backgrounds. Travel, discover, open your mind, nothing in life is only black and white.

Get Inspired by Jana Feliz

I hope I will bring lots of inspiration when people browse on this website or read my Cocobeli book. I love to inspire people through my photography and travels as well. Show them that travelling is not over these days, we just have to travel smarter.

I want to help people to create balance in their life, to live happier and achieve their dreams! Show them, that balanced eating habits that suits their body and needs are important (#EAT of Cocobeli), balanced combination of relaxation, travelling and activity is needed along the way to your dreams (#PRAY of Cocobeli) and getting more inspiration and motivation from other people and projects is essential too. Most importantly to understand that it’s totally normal to ask others for help in case you need it and feel it (#GROW of Cocobeli).

Whatever I do, I do with love and passion. Life is too short to do something just because you kind of like it. Go for what you truly love and make it happen! It might take some time but I believe at the end it will pay off.

During and after my Master studies in Germany focused on international marketing, I was working in large companies and slowly I started to realise that I prefer the start-up feeling. The feeling of creating something new and working on it with all my passion.

Later I started to work as a freelancer in marketing and photography that allowed me to travel and live the digital nomad life.

Since my 20-ties I have lived in several countries such as Germany, Denmark, UK, Spain and later Bali.

When I realised I overcame my biggest fears in my life and started to be happy with myself. Because nobody can make you happy until you are happy with yourself first. This is a true fact.

Other than that, whenever I talk to my family, friends and even clients they share with me that they are healthy and happy in their life and passionate about whatever they are doing. That makes me truly happy.

Year 2020 was for all of us very challenging I believe. I was not the exception. In April 2020 I had to decide whether I listen to my family and return back to Europe with the emergency flight from Bali or I overcome my fears, stay and rely completely on myself.

I focused on what I think is best for me and not for other people. I tried to understand that I cannot support my family and friends back home in Europe in case I am not completely happy staying by myself and leaving my comfort zone. It was a huge step for me and I am very happy I have done it. I listened to my intuition and I think it was one of the best things I have done in my life for myself.

During the challenging situation I practised a lot of meditation, yoga and fitness. I find peace by the ocean, so it helps me a lot to walk on the beach and just listen to the sound of the waves.

I have talked regularly to my coach and started to work on something where is my passion – this inspiring project Cocobeli. And lastly, I was eating healthy as well as delicious food to create balance and listened to my body. I started to be also very interested in another passion and that is searching for healthy natural ingredients in Bali. Some of them amazingly helped me to boost my immunity such as moringa, ginger and oregano.

Favourite Dining Experience
My favourite dining experience was when I used to live in Barcelona in Spain and it is the Botafumeiro restaurant in the heart of Barcelona, close to La Rambla. I just love the whole vibe of the place, it gives you the feeling that you are in Spain very back in time and all staff are very welcoming. The food is just delicious. I especially love the crepes suzette and how creatively they can prepare it in front of you. Most importantly I think the favourite place is also about with whom you are sharing the dining experience with. It was with my favourite spanish family who loves food the same way as I do! Spain, especially Barcelona showed me how to enjoy delicious food in our lives is important and I will be always very grateful for that. I believe Barcelona was the milestone to start my passion for food.
Tips for Balanced Life

While living in Bali, I started to love the morning meditation. It gives me a clear mind for the rest of the day. I believe a workout is necessary to feel good in your body too, because the mind and body is very connected. Usually I listen to inspiring podcasts when I workout.

I also believe in our lives it is necessary to have a balance of spending time alone as well as with others. It gives us time to think from different perspectives and keep our mind open.

Bali has inspired me to change my life and growing an important milestone from the corporate world to fulfilling my dreams and start doing what I am passionate about – photography and freelance marketing.

Things were different 5 years ago when I recalled driving every weekend for around 700 km to either see my family in Czech or an ex-boyfriend in Frankfurt. While sitting in the car, I was thinking but wishing that there must be something more than just work and driving long hours to see my loved ones. At that time, it didn’t come across to me yet.

I was listening to an audiobook called “Eat, Pray, Love” by Elizabeth Gilbert and while listening; I wished I would have the same courage as she had. It’s not that I would not be happy at that moment of my life but I was certainly not in balance with my mind and body and I wanted to change but I was scared to do it.

At one point, I made enough and performed some slight changes. I found a job in Frankfurt and moved with my ex-boyfriend. I accepted a dream job in the fashion industry and grew with the best team there. Just after 6 months, things did not go well in the relationship and I realised and understood that I wanted a different kind of lifestyle and I don’t want to live with someone who works around 18 hours a day including weekends. So I packed my bags and left to start a new chapter. During the new chapter, I met another guy, Guillermo, from Spain who showed me a completely different way of life. It was an extreme change from living with a workaholic to being with a social person who has all his time for me. But where is the balance? At that point in my life, it was not there for sure.

After having known Guillermo for some time, I moved in with him to Barcelona and spent some beautiful months trying to improve my Spanish to be able to scout for jobs easier and getting back to corporate life promptly. However, there was something deep inside of me that sensed it was not something I wanted and I felt that I still wanted to explore more of what the world had to offer. I knew I had to change and do something since the past 6 years, I was only in relationships and trying to follow what society wanted me to do. I did not pursue what I truly wanted, instead, I followed society’s norm by finding a 9-5 job, moving in with my significant other, building a family, having kids, and trying to lead a happy life. I did not want this. I realised I still need more in my life than just following the structure that is forged by society.

After breaking up with Gullermo, I had this spontaneous idea of going on a solo adventure to the Island of Gods, Bali. At first, people were doubting about my decision “Are you crazy? Going alone to Bali?”. I was scared of course especially after 6 years of continuous relationships and always relying on someone having my back, it was a big leap to the unknown. I have never done anything like this before and I did not know anyone in Bali. But at the same time, I knew I wanted to do it and ride on this rollercoaster experience by myself.

Finally, I did it. I took the first plane from Prague to Doha and that’s when I met an angel, Nicol, that sooner or later was going to be my Bali soulmate. The impression of her when I saw her the first time and now was different. At one point on the plane to Doha, she got very angry with the flight attendant who gave her a new cup with every drink she asked. At that time, I wasn’t as eco-conscious as I am right now. I didn’t understand why she cared so much about plastic cups. But our friendship grew when we went to Bali and she showed me around many cool places in Bali from day one.

And the rest of the story you find in a Cocobelibook as well as free sample of the book that you can download here on the website :-)